Berry's Monday Meme came at a perfect time.  My friend Chloe and I always take a Hallowe'en pic together so I'm using my pic from the weekend for this post. 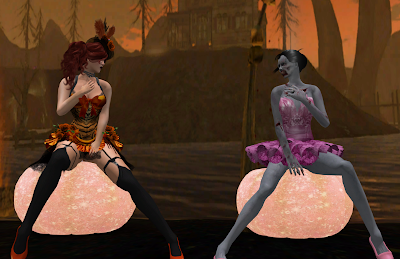 1. Did you go trick or treating as a child?  You bet!!  That was the highlight in my neighbourhood.  We would all get dressed up and go out in a group.  There were 8 of us and we stuck together as a group until I was 12.
2. What was the best Halloween costume you ever saw or wore yourself?  My costumes were always really special to me.  I never had a "bought" costume.  My Mom would gather things over the year - fake jewels, fur, flowers - and then I would wear whatever she devised to put on the outfit.  So I often wore old clothes from my Dad or Mom, or even my Grandmother.  Some of my friends thought that was really cool.  My Mom couldn't sew very well but one year she made me a ghoul costume.  I didn't really like it and neither did my friends because the made-up ones that she did were always more colourful and definitely more special.
3. What is your most vivid memory about Halloween?  One year there was a new family on my block who came from Europe.  The man answered the door and explained they weren't used to celebrating Hallowe'en so he had no candy.  Instead he was giving out nickels.  But to get that nickel, we had to sing a song.  When it was my turn, I sang something I learned in school.  When I was finished, the man gave me a dime because he said I might need the extra money for singing lessons.  Every one of my friends could hardly walk as they were laughing so hard.
4. What is the scariest movie you have ever seen?  I can't watch scary movies so I can't name one...I'll get scared even typing the name.
5. Do you ever get nightmares after watching a scary movie?  My answer to #4 should be a good explanation.
6. Are you superstitious? If so, name at least one superstition of yours.  I don't really have superstitions but this Hallowe'en, when handing out treats, I will never give 4...it has to be less or more...but not 4.
7. What will you be doing for Halloween this year, if anything, in SL and RL?  IF I get a chance to fly into SL, I'll put on my costume and go to some party / dance with my friends.  Probably in RL I'll be giving out treats at the door....oh and eating a few myself.
Good Night for now.
Chloe is wearing:
Costume: Boudoir Driving That Thing Victorian Burlesque
I'm wearing:
Costume: Abranimations Female Zombie Avatar (FREE until Hallowe'en)
We're both on Exposeur pumpkins gacha (sparkle orange)
﻿
Posted by Dreamer at 8:12 AM